Lots of buzz over last night's gubernatorial debate between the incumbent, Andrew Cuomo and upstart Cynthia Nixon. And with this race, as well as many others, there's been a lot of talk about upsets and fresh blood within the Democratic party, all good stuff. But in this case, no dice.

Here's the cold hard truth: African-Americans and Hispanics make up more than 40% of the party in NY. And Nixon's numbers among that bunch, to put it mildly, pale in comparison to Cuomo who has something along the lines of 75% of that demo's support.

Basically, we can predict what happens to a statewide candidate in NY with negligible black and brown support, right?
at August 30, 2018

Could it be that Chump's harping on an on of late about Mueller's investigation, Sessions' recusal, etc. is his bid to distract us all from what he fears is the monumental shitstorm that will come from the fall of Paul Manafort and Michael Cohen, plus the cooperation with the Feds from David Pecker and the Trump Organization's CFO?

You know what they say: It never looks good for the boss when the accountant has the Feds' ear.

Oh, and just a friendly reminder: the POTUS can't pardon anyone for state and local crimes. This means you Jared, Ivanka, Uday and Qusay. Sorry.
at August 25, 2018

Get Your Shit Together, Democrats

I was reading an online Op-Ed piece at CNN critical of what one could call the Bernie Sanders wing of the Democratic Party, written by Froma Harrop, an author/writer who the conservative/libertarian think tank The Heartland Institute has called her its "favorite lefty”. Not good.

And it shows in the CNN piece. Harrop takes on what I would call a benign Fox News tone, respectfully criticizing but not pulling her punches, as she details the sins of the hard left and their effect on the party’s losses over the last two decades.

She does make some good points, though: It’s a fact plenty of folks irresponsibly and/or naively gave their vote to the Ralph Naders and the Jill Steins and then bemoaned getting Bush or Trump in that Faustian bargain. And yeah, the Ocasio-Cortez-type candidates are not going to appeal to the Dem base in every district. But the biggest takeaway for me was her allegation that the party’s hard left was more interested in dethroning establishment Democrats than winning the November midterms. And frankly, that doesn’t seem a far-fetched accusation when you factor in what went down in the 2016 Democratic primaries and campaign and what we’ve seen and heard since.

Listen, it’s time for Nancy Pelosi, Chuck Schumer and the rest of their ilk to hit the road. But let’s keep the eye on the ball: the goal of the 2016 midterms is to gain majorities in Congress not settle internal scores or make dramatic, symbolic purges for the fuck of it. We need to win. Badly. I’d rather hold my nose a little bit and see a Democrat I don’t see completely see eye to eye with win the election, than have another Louie Gomer Pyle or Rapey Roy Moore-type go to Washington.

Democrats are routinely mocked for being more than able to snatch defeat from the jaws of victory. We don’t have the luxury this time. Get on message and stay there, Democrats. We can deal with our dirty laundry after we’ve won back Congress. Don’t fuck this up.

GOP Rolls Over and Plays Dead With Anti-Lynching Legislation

Incredibly, the US Senate has not been able to pass anti-lynching legislation for over 100 years. Right now there is a bill in the Senate to make lynching a federal hate crime. It has 26 sponsors. 25 of them are Democrats. The lone Republican? Tim Scott of South Carolina, who happens to be African-American.

Scott, when asked about the absence of GOP sponsors to the bill, graciously defended his scumbag colleagues and called himself “the first” Republican to support the bill, not the only one and seemed quite hopeful in this regard.

You know, the allegations of black (and brown) folks that Democrats take them for granted have a certain validity, and Republicans have been known to piggyback on this narrative in a futile attempt to win over PoC. And I say futile ‘cause how the fuck do they intend to win over the African-American community when the GOP can’t even get behind an ANTI-LYNCHING BILL?!

How corrupt and sleazy are the Republicans in power? Every day we discover more and more evidence of their thieving ways. But here's a nice little nugget you may have missed regarding Trump's Robin-Hood-in-reverse tax scam, courtesy of Organizing for Action (emphasis theirs):


Rep. Vern Buchanan (FL-16) -- a member of the Ways and Means Committee that wrote the bill, and a Congressman personally worth an estimated $74 million -- bought a massive yacht for himself on the same day he voted for the bill. Just to be clear: Rep. Buchanan wrote and voted for a tax bill that put millions of dollars in his own pocket -- and cashed it in with a yacht the very same day.

Liberal Apologists for Chumpbots Are Ruining The Country, Too.

Didn't mean to do the pop culture crossover but this is an apt instance, politically and socially speaking.

Some rare exceptions aside I loathe reality shows. And the likes of The Bachelor and The Bachelorette I find particularly revolting. So when I read this piece on how the most recent season of the latter show had the liberal girl choose a racist bro who thinks David Hogg of the Parkland, FL massacre is a “crisis actor”, I came very close to losing my dinner. And for multiple reasons.


Let’s not get so much into the incredibly disappointing choice she made by picking a troll over a dude who she connected with; whose politics align with hers; one who her family is said to have preferred; and who actually happens to be a survivor of a school shooting himself. Or how some dudes will take it as proof that women don’t want a good man. Who gives a fuck? It’s stupid show. Whatever.

But let’s look at the fact that she chose the Alex Jones-type dude because she allegedly wants a man to challenge her as the broader statement it makes in these times. And that is, that we should forgive the fucked up transgressions of asshole bigots who have not done the work to deserve it, just for the sake of  “coming together”, “healing the country” or whatever offensive, new age-y bullshit clueless, apologist liberals keep regurgitating.

[Esquire: The Bachelorette Finale Was a Choice Between a Parkland Conspiracy Theorist and a School Shooting Survivor]
at August 08, 2018

I firmly believe that if the vast majority of Trump supporters were to discover that, beyond a shadow of a doubt, Putin tilted the 2016 election towards Trump, they would be grateful to the Russian thug. I've said this often. And now we have proof. 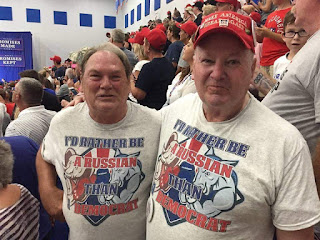 - Gratitude to Putin for delivering the Last Great White Hope.
- The implication that Russia as a staggeringly white country, is preferable to them than the melting pot that is the Democratic Party.

But "They're hurting." Fuck off with that bullshit.

Hey, liberal apologists (looking at you Van Jones, Jon Stewart, et al) do you need any more proof that these are evil motherfuckers?
at August 06, 2018

Dumb Question of the Day

So, the Republicans and their Chump-supporting satellites are campaigning hard on the fear that Democrats will impeach the Orange Turd if they regain control of House, whipping the Chumpbots into a tizzy.

Now, I know Cult 45 don’t respond to reason but shouldn’t they ask themselves this:

How/why could an innocent man—as they believe he is—be impeached?

Build The Wall (between us) 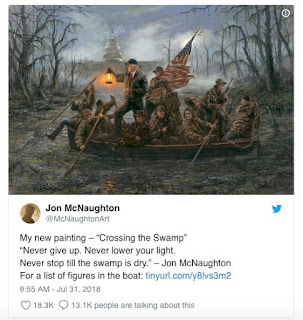 I will readily accept that my political musings can lead to folks seeing me as an über partisan. I get that. And, truth be told, at this point, I don't really care.

You see, I firmly believe that we are divided beyond hope in this country; the point of no return long behind us. It's not just that we have differences of opinion on the major subjects of everyday life, but that we have become, more than ever, an extremely polarized populace, distrustful of the other side and often seeing each other as enemies to their respective ways of life.

And sure, Trump's hatemongering is to blame, but he just stirred up a shitstorm that was already brewing, which gained speed and strength when the ones HRC later called deplorables lost their minds over the election of a black POTUS.

The best we can aspire to, frankly, is benign indifference/social segregation. Right now our living situation is akin to being roommates with an even worse version of Puck from MTV's The Real World (showing my age here, I know) without the option of taking over the lease and kicking him out.

Now, this realization is not new being that every single day there is some development or incident that confirms this perspective of mine. But to witness such absurdity as that depicted in the above painting, the impetus behind it and knowing that a substantial portion of the populace agrees with the sentiment it portrays, is further confirmation that we are living the tail end of the great American experiment.

So, yeah, build the wall. But between these two deeply entrenched and rapidly dissimilar folks. I, for one, want nothing to do with those people. Ever.
at August 02, 2018

But it's liberals who are the elitists, right?

Watch and listen to the former GOP strategist talk about Trump’s “reality show diplomacy”, how “the country is more endangered because we had an unprepared, ignorant president” who prepares “with the same level of rigor that he would plan an Apprentice episode with Meatloaf and Lil John” and calls him "an agent de-facto of Russia's foreign policy."