There's been a lot of talk regarding the community center/mosque to be built mere blocks away from where the World Trade Center once stood. At first I thought this would not be a good idea on the grounds of sensitivity. That was before I found out there are currently 2 mosques within mere blocks of ground zero, one of which was opened in 1970 and actually predates the WTC. (The other has been around since 1985.) Or that a strip club is located a mere 2 blocks away. Now, I truthfully don't know. I really appreciate the feelings and concerns of those who lost loved ones at the WTC on Sept 11th but there are big inconsistencies in this situation. Huffington Post contributor Bob Cesca addresses them. Namely...

...there's going to be a shopping mall literally in the ground of Ground Zero. "Below-grade" means "in the ground." The Ground. In other words, Sarah Palin and her entire gaggle of various babies and ghost writers can visit Ground Zero and honor the heroes and victims of 9/11 while trying on tankinis at Juicy Couture (or whatever clothing stores end up there) constructed within the actual ground of Ground Zero.

This bears repeating: unlike Park 51, which is blocks away, there's going to be a 55,000 square foot mall under the same ground where people fell to their deaths on that terrible day. Ground that's mixed with the remains of the dead. A mall.

Is anyone asking those who oppose this new mosque about the discrepancy between de-facto hallowed ground and soon-to-be commercial real estate? I personally don't have a dog in this hunt, I'm just trying to gauge where people are coming from on this matter. But there's some obvious contradictions here and acting on a whim is probably not a good idea. 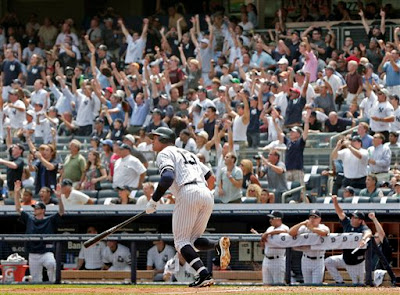 
He did it at home, in front of the Yankee Stadium faithful, a 2-run blast in the first inning that was also the winning run in a 5-1 victory vs the Toronto Blue Jays. A-Rod becomes the 7th player in Major League history to reach this milestone and at age 35 the youngest ever.

His admission of steroid use in the first three years of the previous decade will always be brought up whenever his career and individual stats, and by extension his Hall of Fame credentials, are discussed. But as a fan of the player in question, I acknowledge this transgression but refuse to chime in with the haters and the hypocrites: folks that would leave their current jobs for a $100/wk pay raise elsewhere in a heartbeat, yet cry greed when an athlete wants to take advantage of their small window of opportunity to make money in their given profession before they are kicked to the curb (Bo Jackson, anyone?); or the purists who exalt players from a gloried past but look the other way when the topic of controlled substances taken by these legends of yesteryear is referenced. (Or when in many cases, these retired athletes admit they'd likely have taken today's PEDs if they'd had the chance.) In any event, let's scour the gyms of America and find the most steroid-pumped individuals, give 'em a bat, and see if they can hit 100 HRs against major league pitching, let alone 600.

So today I come not to bury Alex but to praise him--heh, heh--and wish him many HRs to come. May they all be in The Bronx and with A-Rod wearing pinstripes.